Industrial Solid Waste – which may be solid, liquid or gases held in containers – is divided into hazardous and non-hazardous waste. A Solid Waste is Hazardous if – It is in one of the three categories: OR It exhibits one or more of the following characteristics, subject to certain tests: Certain waste is exempt from regulation as hazardous waste under Resource Conservation and Recovery Act even though it may potentially harm human health or the environment like domestic sewage, irrigation waters, Household hazardous waste, Waste from the exploration and development of petroleum, gas and geothermal energy agricultural waste (except some pesticides) etc.

Hazardous Waste is governed by Hazardous Waste (Management, Handling and Transboundary Movement) Rules, 2016. The rule makes it mandatory for occupier and the operator of a facility for proper collection, reception, treatment, storage and disposal of hazardous wastes.

These rules help in identifying hazardous wastes by means of industrial processes and waste streams and also by way of concentrations of specified constituents of the hazardous waste. Categories of wastes banned for export and import have also been defined. 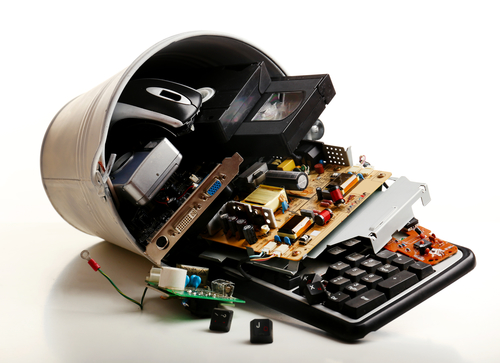 E-Waste consists of any broken or unwanted electrical or electronic appliance. It is a point of concern considering that many components of such equipment are considered toxic and are not biodegradable.

An estimated 50 million tons of E-Waste are produced each year.The Environmental Protection Agency estimates that only 15-20% of E-Waste is recycled, the rest go directly into landfills and incinerators.

According to a report by UNEP titled, “Recycling – from E-Waste to Resources,” the amount of E-Waste being produced – including mobile phones and computers – could rise by as much as 500% over the next decade in some countries, such as India. The United States is the world leader in producing electronic waste, tossing away about 3 million tons each year. China already produces about 2.3 million tons (2010e) domestically.